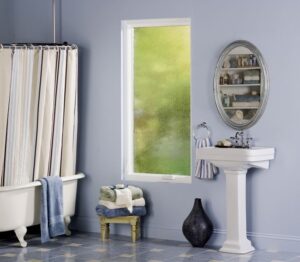 As the name indicates, awning windows resemble a traditional window awning. They’re hinged at the top and open away from the home, and can be operated by a hand crank. They’re a great option for tight spaces where ventilation is a necessity, so they’re often found in basements, bathrooms, and above kitchen sinks. They can also remain open during a light rain since they provide protection against rain entering the home.

Casement windows also attach to the frame in one spot and open using a hand crank, but they’re hinged on the side. They are often used in openings that have greater height than width, and some homeowners choose to fill a large window opening with a bank of casement windows installed side by side.

As for their similarities, awning and casement windows are both easy to operate and allow for maximum ventilation, and since they feature a hand crank, they form an excellent seal against air drafts when closed properly.

If you’re interested in having awning and casement windows installed in your New Jersey home, or you’d like to discuss the advantages of one style vs. the other, look to Window & Door Outlet, Inc. We’ve been providing high-performance replacement windows for local homeowners since 1997, and we can help you select the perfect option for your home.